Why the FANGS could bite into your portfolio

There is much investor interest in the so-called FANGs Facebook, Amazon, Netflix and Google, and the rest of the ‘internet-based’ companies. But while their popularity continues to grow there are reasons to be cautious around their ability to continue to deliver solid returns for investors.

Investors have no doubt heard of, or had some exposure to the FANGs (Facebook, Amazon, Netflix & Google). These are the largest and most well-known companies in a group which really includes any company with a predominately internet based service delivery model. While these companies continue to grow strongly, currently with very expensive valuations, we don’t have to look too far back to find an example where something similar has happened before.
​
The 'Tech Wreck' Lesson

In March 2000, the Technology, Media and Telecoms (TMT) bubble burst. The sector had been trading at a previously unseen PE multiple of 95.2x.  In contrast, on 27 March 2000, the S&P 500 was trading at a multiple of 34.6x.  To understand how spectacularly expensive a PE of 95.2x is, consider buying an investment property, for say $500,000 and receiving only $5,252 rent for the year, that’s about $100 a week. (95.2 x $5,252 = $500,000).
So how could you justify this valuation? Maybe, you purchased the property in a hot new area of town, you expect high demand in the future, and expect the rental income to grow strongly?  You know you’ll need to renovate the property over time, the kitchen and bathroom will need upgrades, new carpets, painting, etc.  You can see most of your rental income getting reinvested.
​
The danger is, if the demand doesn’t materialise to the extent you forecast, or other, cheaper, more modern properties become available, or the property needs even more reinvestment than expected, then your property is going to trade lower, perhaps much lower.  In short, there is no margin for error.  For TMT stocks all of these things happened.

What can we learn about a technology bubble from historical Price to Earning valuations?

By looking at the historical Price to Earning valuations we can identify the following three characteristics of technology related bubbles.
​
The first is, it is hard to predict when the correction will occur.  The tech sector traded at ever higher multiples for several years prior to the major correction.  There were some drawdowns, but euphoria in the prospective returns offered by early adopters of the internet pushed prices higher.

​The second important fact is that the correction actually took some years to fully run its course.  There was an initial a sell-off of TMT stocks and the market more broadly, then there where the write-downs and the economic slow-down, eventually there were the bankruptcies.

The third fact is that it took twelve years for the IT sector’s valuation to match the market.  It wasn’t until January 2013 that both valuations matched at a PE multiple of 17.6x.

You could argue the market was right in March 2000.  The IT sector did offer an enormous growth opportunity which you would expect to pay a premium for.  What the market got wrong was how much of a premium to pay. 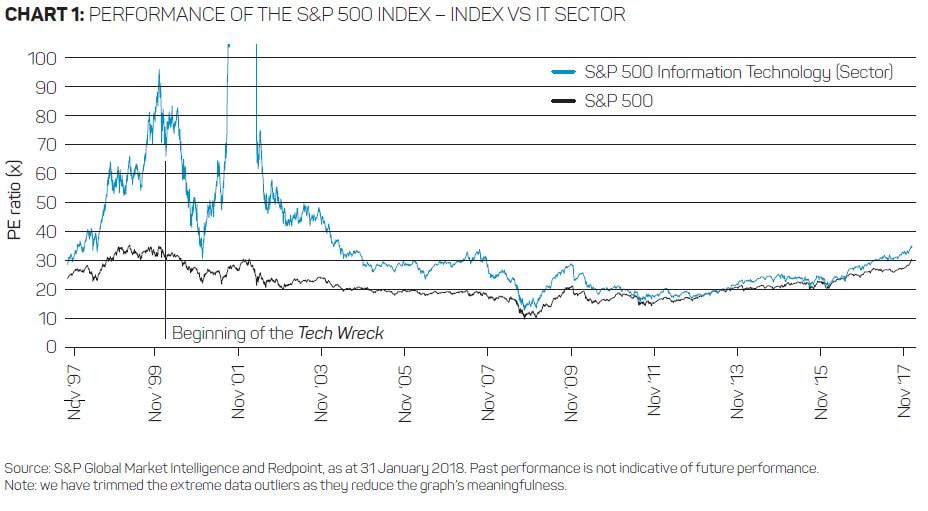 Be wary of the FANGs
Today, we are looking at a similar situation, the S&P 500 is trading at a PE of 30.2x (34.6x in March 2000), but we need to look deeper into industries to see those companies trading at eye-watering premiums to earnings.

The chart below shows the PE and Forward PE of the largest constituents of the Internet Software & Services and Internet and Direct Marketing Retail industries which includes the ‘FANGs’.  The Forward PE is measured as current price relative to the consensus earnings forecast for 2019.  The chart is sorted from largest company to smallest company.

With the exception of eBay, valuations for these companies range from high (twenty-something), very high (thirty-something) to extreme (forty-something+).  The spectacularly expensive Amazon & Netflix, are forecast to get to reasonable valuations.  Factoring in no share price growth, that will be in 10 years.  Netflix is a large as Commonwealth Bank, the largest Australian company.  Twitter, currently loss making, is as large as Transurban, is expected to reach a reasonable PE in five years, again assuming no share price growth.
​
To give an appreciation of scale of these internet companies, they have a market capitalisation roughly the size of the UK share market.
Viewing these valuations another way, the following chart shows the PE of the NASDAQ Internet Index, known as QNET against the S&P 500.  The NASDAQ Internet Index includes 84 internet technology companies trading in the United States.  Internet stocks had, in totality, negative earnings for much of the early part of the 2000s, so a PE doesn’t make sense and isn’t displayed. 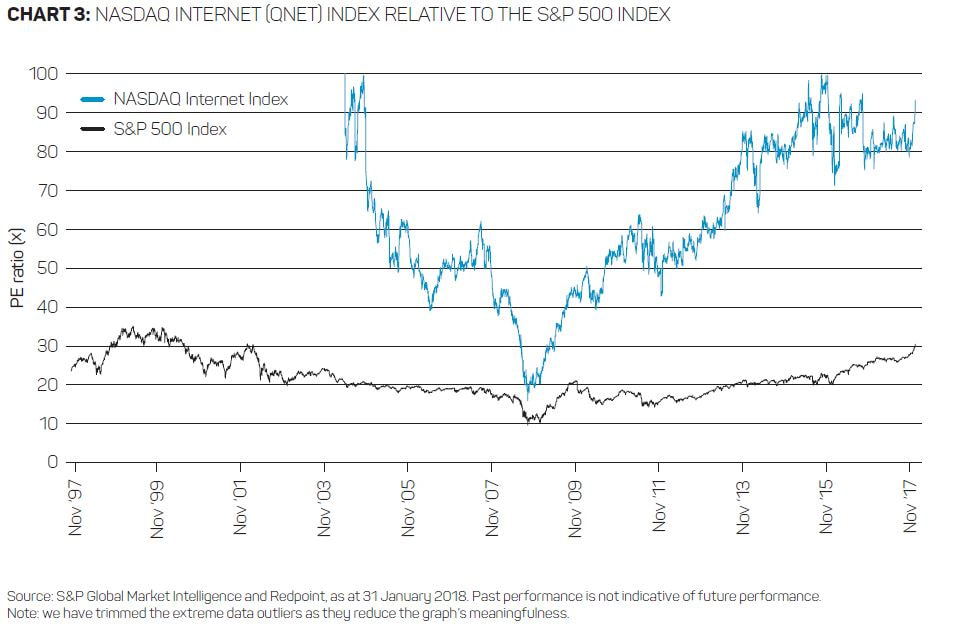 Once bitten, twice shy
At a current PE of 93.1x the NASDAQ Internet Index is looking much like the IT Sector in March 2000.  Whether the internet sector suffers (another) tech wreck, rises from here, or flattens, is unknowable.  One thing is certain though, the sector is very expensive.  While investors should be looking towards sectors which are driving innovation and growth like internet-based companies they should also take into account past lessons and their individual circumstances to ensure they don’t end up being bitten where it can hurt most; their wealth.
Important information : This communication is provided by Redpoint Investment Management Pty Limited (ABN 83 152 313 758, AFSL 411671) (Redpoint). The information in the communication is of a general nature only and is not financial product advice. The communication is not intended to offer products or services provided by Redpoint or its affiliates. Opinions constitute our judgement at the time of issue and are subject to change. Neither Redpoint nor its employees or directors give any warranty of accuracy or reliability, nor accept any responsibility for errors or omissions in this communication.