Socially responsible investing (SRI) is a theme that continues to attract investor attention. The idea that investment capital can be used to address social justice and ethical issues is not new.  A recent survey undertaken by the Responsible Investment Association Australasia (RIAA) noted that 85% of Australians believed that their superannuation should be invested “responsibly”. 4 in 5 (82%) Australians consider important social issues when investing. The top three issues Australians find important are renewable energy (48%), healthcare and medical products (45%), and sustainable practices (44%).[1]

A longstanding SRI practice is the exclusion of ‘sin stocks’ such as firms that manufacture alcohol and tobacco products or engage in the production of armaments. SRI has more recently focused on firms that contribute to climate change.  SRI has naturally evolved to promote a focus on firms engaged in non-exploitative, sustainable economic activity.

But apart from discussing the potential positive effects of implementing SRI practices in investing, how could portfolios be affected from a risk and potential return position? Can investors in their quest to ‘invest for good’ still own a 'good investment'? 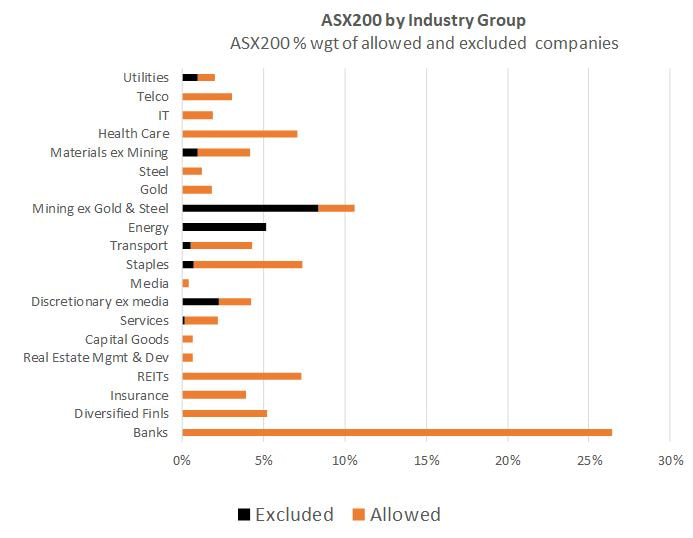 This screen removes 23 companies and almost 20% of the investible universe [2]. The exclusion list has a high concentration in resource-related industry groups such as energy and mining mainly due to the screening of fossil fuel extraction activities. The exemption of fossil fuels alone will screen out approximately 15%.

The exclusions in the consumer discretionary sector are gambling-related companies. There are currently no members of the S&P/ASX 200 involved in the manufacture of tobacco, controversial weapons or pornography.

It’s important for investors who are building diversified Australian equity portfolios to consider how diversified they remain when they exclude companies as part of their SRI process. If investors take that capital away from their portfolio then simply re-weight it according to the market cap of the stocks left, they’ll move from having one bias, to essentially having another as most of that capital will be put into the four large banks.

But when you exclude fossil fuel companies…[3]

BHP is one of the largest miners of coal and petroleum in the world, with almost US$15 billion in revenue from these activities contributing to total revenue of US$38 billion (almost 40%).  As well as excluding BHP, the approach we used for our analysis also excluded South32 and Whitehaven Coal. While Whitehaven is exclusively involved in coal mining, it is a much smaller operation than BHP, with US$1.4 billion in coal revenue in 2017. The key economic risk to these companies is that they may be precluded from realising their fossil fuel reserves – either economically, with the imposition of a fully-costed price on greenhouse gas emissions, or by sanction, with government-imposed limits.

While there is little doubt that we will eventually see a low carbon world, the path to that day remains uncertain.  The implications for BHP’s share price, and that of other companies with a dependence on fossil fuel reserves, is equally uncertain.  What is certain is that a significant proportion of these reserves will be written down to zero before they are recovered. The economic consideration for investors is: will BHP, as a large scale, low cost producer, be a ‘last mine operating’, sell or spin-off its fossil fuel business (allowing investors their choice of exposures), or find these assets become essentially worthless?

On the face of it, an ethically motivated decision might be to ‘sell now’. However, investors should also consider that BHP has a range of other valuable operations which support the ongoing growth and development of the global economy.  And as a key stakeholder in environmental issues, they have made significant investments in monitoring and reducing their firm-wide environmental impacts.

Similarly, electrical utility AGL Energy – by its own admission, Australia’s largest greenhouse gas emitting business [4] - would be removed from the investible universe analysis for that reason. However, it’s also a major developer of renewable energy sources. The economics of the transition to a low carbon world are uncertain in the gas sector as well.  If a company has pricing-power, then it may be able to maintain earnings by increasing prices to customers.  Increased cost will likely bring new competition and hopefully, innovation.

Is it feasible that companies such as BHP and AGL end up being examples of how to transition away from fossil fuels and play a major role in assisting global efforts to meet government-agreed limits for global warning? Should investors seek to provide capital to support these initiatives? Should investors maintain positive pressure on management by using their shareholding as an engagement tool?

Each investor will have their own view. Whatever their view, they should consider a range of additional insights to assist in building their equity portfolios such that they can still aim to hold a good investment while also investing for good.
Footnotes
​[1] 'From values to riches', Responsible Investment Association Australia, November 2017
[2] redpoint Investment Managament
[3] Past performance is not a reliable indicator of future performance. The value of an investment may rise or fall with the changes in the market.
[4] 'Climate Change', AGL https://www.agl.com.au/about-agl/what-we-stand-for/sustainability/climate-change accessed 19 February 2018.